Stonehenge, Spring Equinox, Arianrhod and the Rites of the March Hare 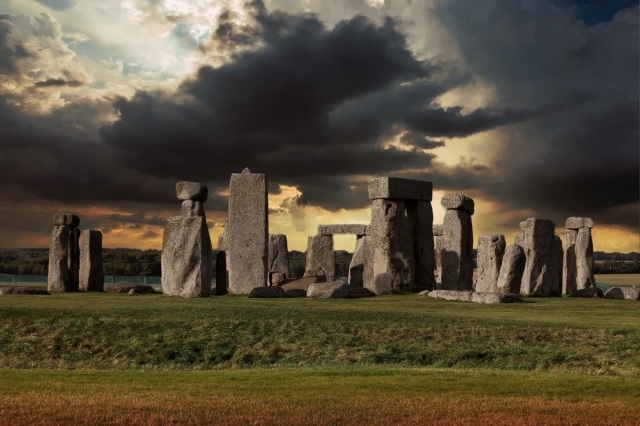 This year’s Spring Equinox managed Open Access at Stonehenge fell just a few short hours after a ‘Super Worm Moon‘ illuminated the night sky, at almost exactly the same time as the Vernal Equinox had taken place a few hours earlier. According to the National Geographic website, which quoted the well known Astronomy website EarthSky.org, such an astronomical occurrence has not taken place since the Millennium Year. The author of the same article also added that these two highly significant celestial events won’t fall less than a day apart again until 2030. These two landmark Astronomical occurrences were further enhanced by the fact that the Equinox Full Moon, which fell at approximately 2:43 am (CET) at Libra 00° 09′, was itself the third and final Super Moon of 2019.

In Celtic Mythology this time of year has a close association with the Ancient Welsh Sea God Dylan, whose Mother, Arianrhod, gives birth to both him and his twin brother, Lleu Llaw Gyffes, following a magical initiation in which the warrior King Math requests that she step over his magician’s rod as a means of proving her virginity. Arianrhod herself is both a Moon Goddess on the one hand, and is likewise associated on the other with the Northern Celestial constellation of Corona Borealis. A connection that forms the basis for her divine name, which, when literally translated, means ‘Silver Wheel’. The constellation of Corona Borealis is referred to as ‘Caer Arianrhod’ in Welsh, literally the Castle of Arianrhod, and follows a path in the night sky around the central North Star in the Heavens.

The constellation of Corona Borealis is at its most visible in the month of July. The latter link confirms Arianrhod’s role as a Moon Goddess, in that the Astrological Sign of Cancer, in which the Sun resides for much of July, is ruled by the Moon. The fact that her son Dylan is not only a Sea God, but is also confused with the Biblical patriarch Noah in some Medieval Welsh poetry, most notably the ‘Hanes Taliesin’, likewise confirms the connection with the Astrological Sign of Cancer; which includes the Constellation of Argo Navis, or the Ship, among its extensive stellar complement. The fact that Dylan is not only a Sea God, but also takes on certain characteristics that one would normally associate with a fish, following his legendary Christian Baptism, likewise connects him with the portion of Lent that falls in the Astrological Sign of Pisces, which this year began on Wednesday 6th March.

Interestingly enough, the Ancient Saxons appear to have held a feast day in honour of a Germanic aspect of the Pagan fertility goddess Eostre, who has passed her name on to the Christian Festival of Easter, on the Full Moon directly following the Vernal Equinox; which, as we have already noted, fell within hours of the Spring Equinox on the night of the 20th and 21st of March. In Celtic Christianity the March Hare is associated with the Irish Princess St. Melangell, who fled to Powys in central Wales to escape an unwanted marriage. Although the exact reasons for St. Melangell not wanting to marry a nobleman of her Father’s court have alluded us, a reference in her legend to how a March Hare which was being hunted by Prince Brochwel Ysgithrog of Powys, possibly at the old Welsh Spring Equinox Festival of Cyhydnos y Gwanwyn, is supposed to have successfully sought shelter beneath her dress suggests that she was not necessarily a virgin; as Christian tradition suggests.

In early Latin texts St. Melangell is referred to as St. Monacella and March Hares as ‘Oen Melangell’, or St. Monacella’s Lambs. The origins of this association almost certainly date to well before the advent of Christianity, in that although the fabric of St. Melangell’s Church is predominantly of fifteenth century origin, with parts dating back to as far as the twelfth century, it is built within a circular churchyard which is believed to be a Bronze Age burial site. The churchyard is ringed by a circle of ancient Yew trees; some of which are believed to be more than two thousand years old. The fact that until the seventeenth century no one living in the Parish would dare to kill hare seems to suggest that the hare was worshiped here in Pagan times. And, the fact that certain aspects of the Bronze Age cult centre that almost certainly existed here, before the coming of Christianity, point to the former existence of a sacred site not unlike the one described in the Ossianic legend of Oisin and the Hare, within the confines of St. Melangell’s circular churchyard, seems to indicate that the Anglo-Saxons were not the only previously Pagan people in Britain to have had their religious festivals in some way co-opted by the introduction of a supposedly ‘Christian’ Easter.

A lineal descendant of Captain Robert Ferguson (1719-1799) the older brother of the great Scottish Enlightenment Philosopher and historian Adam Ferguson (1723-1816); the friend of Hume, Gibbon and Adam Smith. Also related to the great feminist author and playwright Rachel Ferguson. Have written extensively on a vast range of subjects, been published in print as book author and in various journals and magazines into the bargain. Early work as an underground film maker on the early Goa Trance and radical anti-CJB political scene in the 1990s has since become more refined and ambitious and I have since been a regular contributor to such high profile events as the Portobello Film Festival Annual Film Maker's Convention.....
View all posts by Rupert Ferguson →
This entry was posted in Stonehenge and tagged Arianrhod, Brochwel Ysgithrog, Castle of Arianrhod, Corona Borealis, Cyhydnos y Gwanwyn, Dylan, Easter, Eostre, Hanes Taliesin, King Math, Lleu Llaw Gyffes, March Hare, Oen Melangell, Oisin and the Hare, Powys, Spring Equinox, St. Monacella's Lambs, Stonehenge, Super Worm Moon, Vernal Equinox. Bookmark the permalink.